The photo at right (taken May 22, 2004) shows the south or back side of the Buckland Farmhouse on Westfall Road. The ground around this building was examined during the summer of 2005 to search for farm artifacts. Due to the access regulations to the property during construction methodical archaeological dig techniques were not used. Despite these limits of search many artifacts were uncovered (~600 artifacts) and the following pages illustrate some items found. A simple summary of items and shards found were as follows: Pottery ~100 shards, Glass ~ 100, China ~ 200, “Blue Willow” design plates & cups ~ 100, Metal ~ 50, and plastic ~ 25, for a total of about 575 shards allowing us to review life at the Buckland Farmhouse. 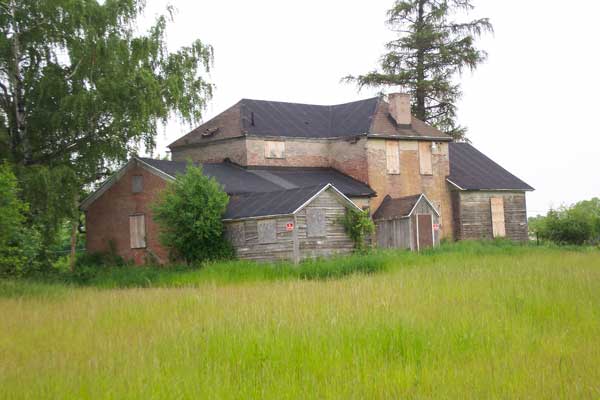 This chart pictures a variety of objects found at the farm. The Paul Friedler bottle was found intact. Only the base of the Buffalo Pottery cup was found with 1911 identification mark. All the spherical, metal, buttons, doll items and indian head penny items were found as shown. The flint Indian scraper was found in what is now a soccer field west of the farm house in 2003. The scraper is the oldest item found, dated estimated as well before 1800. The Atlas glass bottles were found only in pieces, many pieces. The finding of five clay marbles seem to fit well with the extensive surrounding of clay fields on the farm. 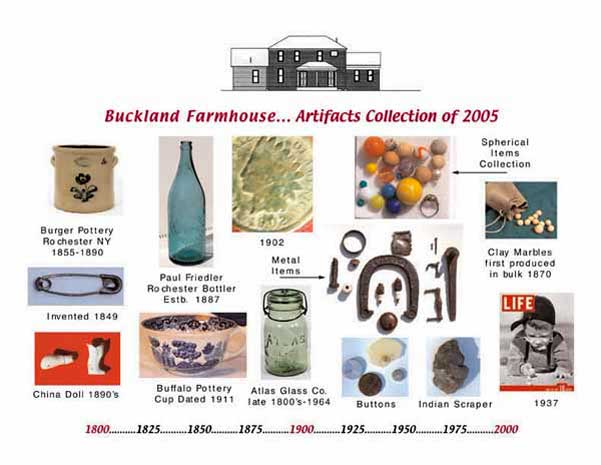 The oldest item found, pre-1800, was a native American tool. The item is called a “scraper,” and was constructed from flint. They were used chiefly for the preparation of hides and skins for clothing and bedding but were also used for the working of wood, bone, or softer materials.This tool was found, on the surface, in a plowed field several hundred feet west of the house. Dr. Martha Semposki, a Research Fellow at the Rochester Museum and Science Center, identified the item. Martha said that it was not possible to date the item because most scrapers looked alike, and were used over hundreds of years with little change. She also said that if we had looked close by we probably would have found an arrowhead that would have help date the scrapper, for flint arrowheads progressed in style over the years and can be dated. This tool measures one & three quarters inch long and one and a quarter inch wide. This historical link to a previous century and Woodlands culture was very exciting, and unexpected. The retreat of the ice sheets to the north began about 10,000 years ago allowed plants to grow and woodlands to develop inviting forest hunters to inhabit the area. This land, called Brighton, was their land …what a neat historical reminder! 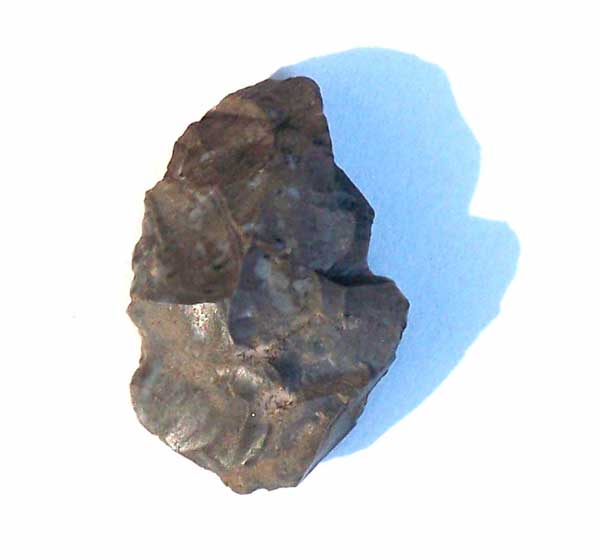 These eight bottles were found intact and unbroken. The smaller four clear color bottles had a inky black content inside. (A mystery content.) The large green bottle (11.75″ high / 3.5″ dia.) was marked “Paul W. Friedler Rochester N. Y. 30 fl. oz.” An interesting find to locate such a large bottle unbroken. This was found just east of the house and about 50 feet south of the rear of the house. We believe it was brought to the surface by a power shovel moving dirt during the grading operations. 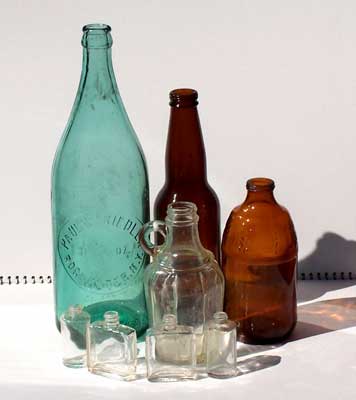 We were surprised to find the large collection of shards that contained a “Blue Willow” pattern. This design was produced by many pottery factories of the 19th and 20th centuries. One fragment contained the logo of the “Buffalo Pottery Works.” The Buffalo Pottery Co., started in 1901, produced dinner and art ware in semi-porcelain that was used with soap purchases from the Larkin Soap Company of Buffalo, NY. 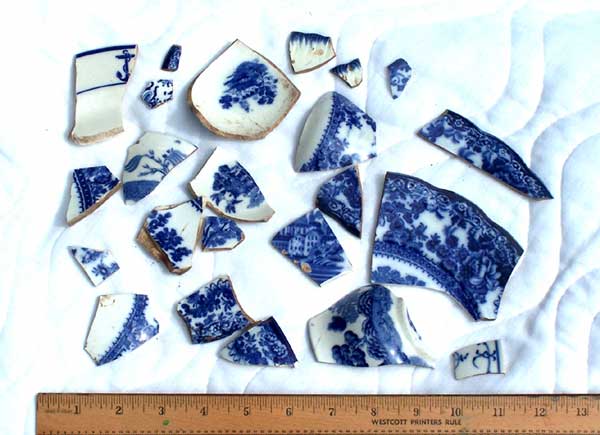 These glass items are all fragments of a green color glass bottles which I assumed were parts to the home canning jars available from several suppliers. The Atlas’s glass identification can be read on many of the parts, but not all. The Hazel-Atlas Glass Company was in business from the late 1800’s until 1964. The decline of home canning began after the end of World War II. 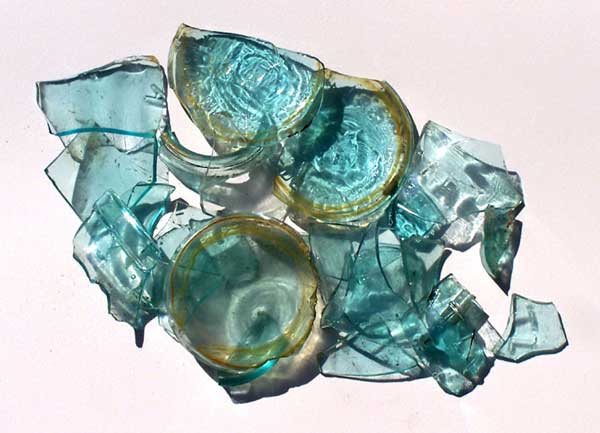 The collection of glass shards was very interesting illustrating the various glass containers of the 19th and 20th centuries. The shards were very small and the embossed titles and names were incomplete so as to make identification very very if not impossible, without a complete bottle for comparison. 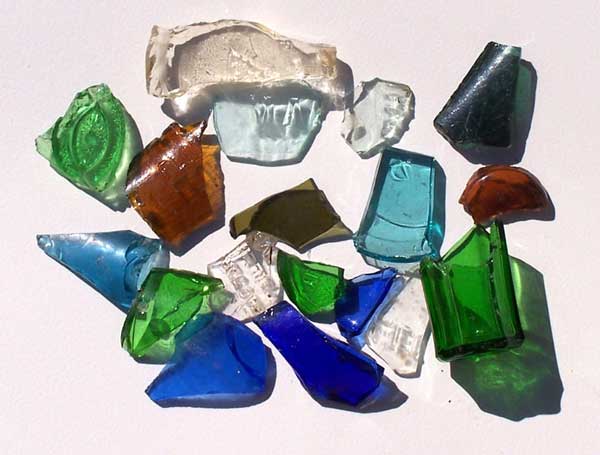 Several ear tags for animals were found behind the house and in the fields surrounding the house. This was a dairy farm for many years. The practice of identifying your animals is an old practice used before the invention of plastics, when making your own specialized style of cut in the animals ear was made by each farm. 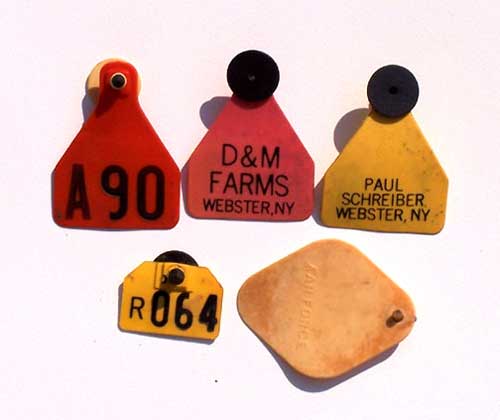 There was a great variation in the shape of the glass bottle tops that were found. The necks of these bottles were very strong and resisted crushing even though the main portion of the bottle was destroyed when discarded. Identification as to content or use is extremely difficult. 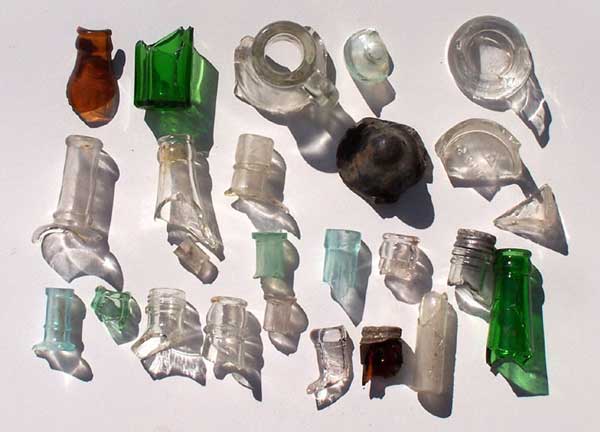 These metal items are also a wide collection of items from games to tools. The horse shoe was found in the front lawn where you might expect the game to be played when chores were completed on the farm. The round ring is a split ring used to interlock barn beams together. Other items were bolts, washers, spark plugs, drawer handle, door knob, ladder clamp, nails, and coupling. 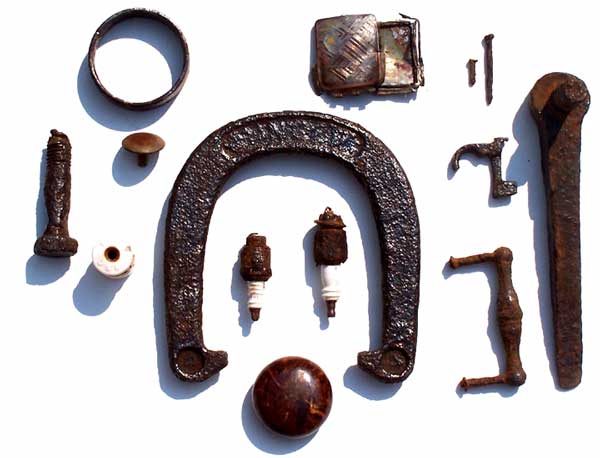 This large collection of spherical items illustrates the strength of these objects that allows for their survival when buried in the fields and deep in the ground around the house. We found five clay marbles, which were considered akin to the Brighton Clay Brick Industry), six glass marbles, two earrings, and several plastic toy or game associated spheres. 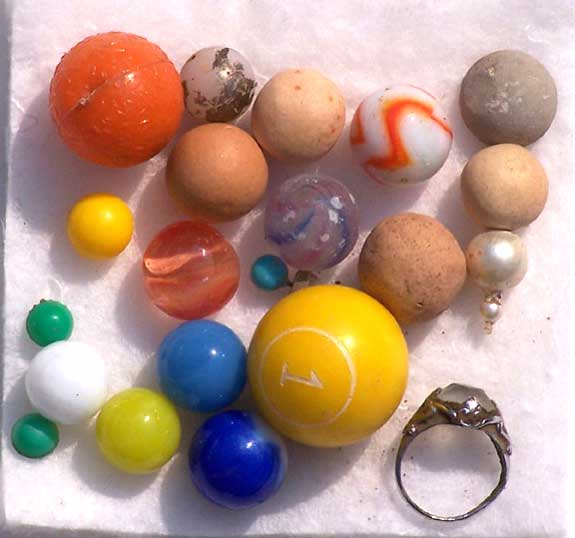 Three silver plated spoons, one fork, a toy sand trowel, a wooden handle screwdriver and a plastic screwdriver were among the more durable household tools found mainly in the back of the house. 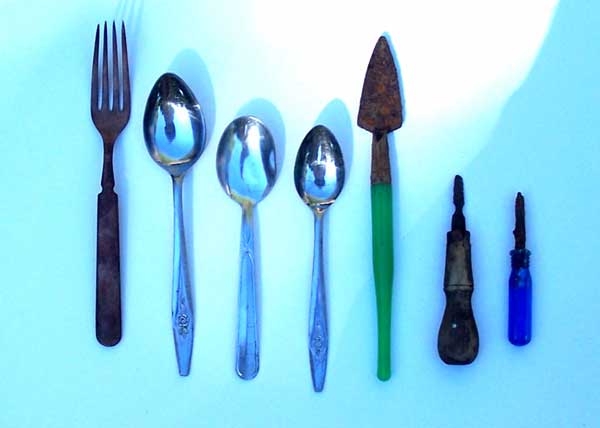 Rochester was the home to several very famous pottery companies in the 1800’s. The John Burger Co. was one of these which operated from 1855 to 1891. Shards of pottery showing the Burger logo were found on the Buckland property. The photo at right illustrates what the completed Burger crock may have looked like.

A plastic dolls head, a screwdriver, a safety pin, two clay marbles, a button, a toy ring (Known as the “Buckland Diamond”), a blue ear ring, a toy tin cup, two bottle tops, a clay pot shard, some of the many items found at the Buckland Farmhouse in the summer of 2005. Small items but collectively unfolding the story of life on Westfall Road. 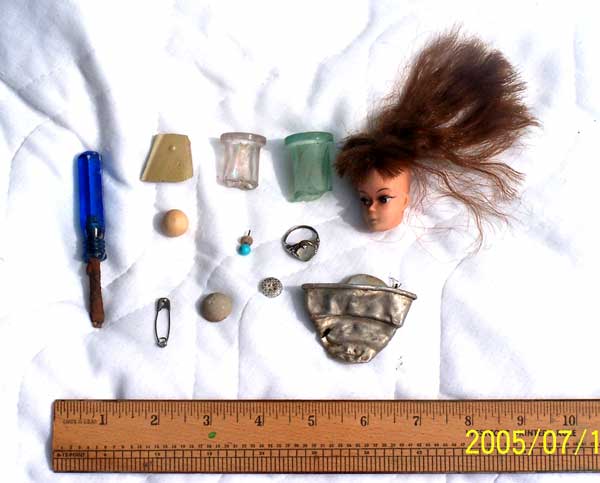 Two Indian Head pennies were found on the property. One (an 1898) was found in the fields west of the house in 2003 and another (1902) was found at the front porch of the house in 2005. They both were said to be of little or no value because of the weathered condition. Beyond the monetary value we thought they were of great interest and excited to find an artifact of farm life dated over one hundred years ago. 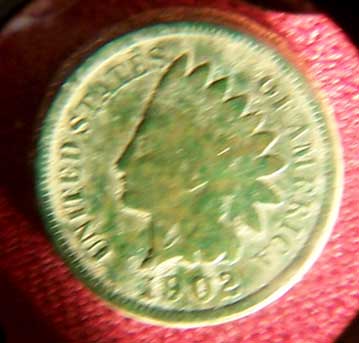