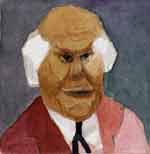 Leo Dodd found at the Rochester Public Library an account of the life of “Jason Baker: Monroe County Treasurer” written by Carol B. Bickel. Jason was Carol’s great, great grandfather. Her account gave information to document the background history of the Baker family. We found that Jason’s brother was a Brick maker in 1850 US Census: Coxsakie, New York, Green County:

The second fact was that Jason’s sister Harriet was married to Alvin Burton. These facts describe a man who had an understanding of brick making, traveling with his brother in law to Brighton, the center of up-state New York brick making industry and invest and grow a new brick making factory. They came from the Hudson River area which was to become the center of the brick industry in support of New York City. This data allows us to connect Burton & Baker with greater understanding to the facts presented below.

We had located three references to Jason Baker in his relationship to the Brighton Brick Industry but we have never seen or read that he was an operator of a Brick Yard. The references we found are as follows:

“Turning around toward the Court House Mr. Buckland remarked “This is a building I helped build. When the subject was first broached two plans were drawn – one providing for a brick structure and one for stone. Neither of them was adopted. The Common Council concluded to take the brick plan and the job was let to Baker and Cobb, who got some materials and commenced work.”

So were Baker & Cobb in Business together in 1850? Probably!

The third is an article that appeared in the “Rochester Daily Advertiser” Wednesday Evening – Feb. 16, 1853…page 2, Column 6 under “Home Matters.” This story seems to indicate that Jason Baker was a leader in the formation of the Rochester Brick & Tile Co.

“BRICKMAKING ASSOCIATION – Owing to the steady – indeed we may say rapid – growth of the city the article of brick is one of much importance; and we have been informed that many structures are greatly delayed for the want of this article of building. As a means of giving greater energy to the manufacture of brick and drain tile – the latter an article rapidly coming into favor – the Democrat learns that an association denominated “The Rochester Brick and
Tile Manufacturing Company” has been formed with a capital of $100,000 – That paper adds – “Several of our wealthy citizens, not engaged in this branch of business before – as Messrs. Boody, Otis and others, – have taken stock in this company. Gideon Cobb Esq. of Brighton, well known for through-out the State as an enterprising farmer, contractor and brick maker, has been chosen President of this company. Jason Baker, Esq., of Brighton, has been appointed sales man in general of the wares to be manufactured. It is known that in Brighton, within three miles of the city, is an extensive bed of brick clay, from which have been produced most of the brick used in building up our city. The gentlemen owning and operating the brick yards are all of the most energetic sort. A large business will be done under the new arrangement. Of the probable quality of the brick and tile that will be produced, we need not speak. They will make none but such as will be likely to command the market.”

The above leads Leo to the speculation that Jason Baker was an investor in the Brick Yards of Brighton or the contracting officer. He seems to be one who obtained business and not a Brick Yard operator as one who fired the kilns. His associations indicate that he was a strong leader in the Brighton Brick Industry. He was associated with brickmakers Gideon Cobb, Alvin Burton, Edwin Wilson, Isaac Moore and William Otis and had political ambitions, Brighton Town Supervisor 1849, and Treasurer of the City of Rochester (1860-1864). 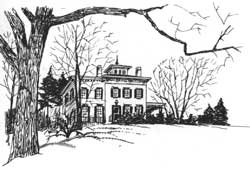 This very impressive home on Highland Avenue is called the “Manor House” was built by Jason Baker, and most assuredly, using Brighton Brick

Jason Baker was a very active man within Town and City. His political contacts set him a logical person to conduct business and be aware of new building ventures and thus secure contracts. Also you could possibly read into these notes that there was a very close association with this community of brickmakers in Brighton. The three Yards of Cobb, Wilson & Burton may have worked as a team prior to the purchase by William Otis.