Songs about celebration, winter, and, of course, love, all woven into Christmas and the holidays. At the center, though, is Irving Berlin’s “White Christmas,” America’s Christmas anthem, a melancholy celebration of America’s Christmas by a Jewish immigrant from Russia. It’s a uniquely American story and leads to a look at some of the other classic songs written for the holidays and the season by the songwriters of Tin Pan Alley.

About the Speaker: Michael Lasser is the former host of the Peabody Award-winning public radio program, “Fascinatin’ Rhythm,” which originated on WXXI-FM. He is the former theater critic for the Roches­ter Democrat and Chronicle and CITY. His two books about American popular music remain in print, and he’s recently completed a third, City Songs: The American Popular Song, 1900-1950. A graduate of Dartmouth College, he frequently speaks at museums and universities. 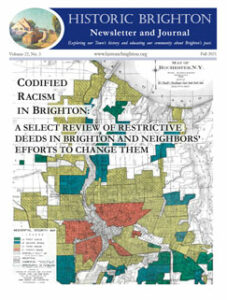 Due to our current inability to properly distribute the most recent newsletter to the public we have made it available online here for your convenience and enjoyment.

In our new Fall 2021 issue, some of the featured topics include: