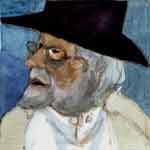 Isaac was a leader of causes and men, a “take charge” and “move to the front ” type of person. His interests and energy were immense and he involved himself in a variety of leadership tasks within in the Township of Brighton, in the growing city of Rochester, County of Monroe and in the State of New York. He was a businessman, land owner, political party leader and community leader. A listing of his involvement reads as follows:

You will notice from the listing above that Isaac was always at the leadership role of any organization he joined, a testimony to his capacity to identify community needs early and provide the wisdom and energy to direct others in accomplishing their goals plus the acceptance of his leadership.

The rapid growth of Rochester which began in the early ‘1830’s’, demanded great quantities of brick and lime, the raw materials for which Brighton had in abundance. Isaac Moore in 1823, was making brick on a farm just west of the “Rock and Elm” on East Avenue. a few years later he was established on Clover Street where he carried on business several years, and then located on the State Road west of the “Twelve Corners” having a partner Edgar Wilson. By the way, after he left the first named yards, Robert Irwin carried them for several years. There was a brick yard on the Romanta Hart farm just west of his home, but when and by whom operated, we do not know. The Bucklands, Amos and Abner, and possibly Leonard, were brick makers on the road running south of the “12 Corners.” As wood became too scarce and valuable for brick burning, coal came into use and the Rochester Brick and Tile Co. on the State Road East of Cobb’s Hill began operations about 1857 on a large scale, using coal. Jason Baker was the Manager or President of the Company.”….page 4

The above record was found at The Rochester Historical Society on East Avenue, Thursday, September 25, 2003, Records of “Bloss/Estate” contained in Box 86.31.51a, within folder #6, titled “Brighton History”, “The Reminiscences of Joseph H. Cogswell”.. Chapter 4…”The Manufactories of Brighton”

The other possibility of location would be to locate the yard on the west side of Monroe Avenue. Edwin Wilson is shown to have a Brickyard at this location, shown on an 1852 map, James Cogswell states that Edgar Wilson was a partner with Isaac Moore. Land records show that Edwin Wilson sold, in 1852, 17 acres in Lot #29 to Abner Buckland. Did Abner Buckland buy this land for his brother Leonard and was Isaac Moore a party to this sale?

Note: The record of Isaac Moore and Edgar Wilson being partners in the Brick Business would establish the last date of the Isaac Moore Brick yards as existing from 1823-1853. Isaac Moore arrived in 1823 and Edwin E. Wilson sold to the Rochester Brick & Tile Company in 1853. This partnership may also say that the location of the Moore/Wilson Brick Yard was next to Gideon Cobb’s Yard on Monroe Ave. We have no record that Isaac Moore was connected with the Brickyards
purchase in 1853 of the three major brick makers on Monroe Avenue, Cobb, Burton & Wilson which resulted in the birth of The Rochester Brick & Tile Company. 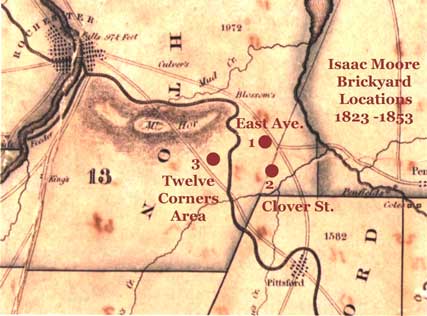 We have viewed two ads placed in the local paper, one in 1828 and the other in 1834; both ads document the existence of the Isaac Moore Brickyard. The first ad of 1828, published in “Rochester Daily Telegraph” June 28, 1828: reads as follows:

First quality BRICK, at the brick yard of the subscriber in the town of Brighton.

The above advertisement gives proof to the existence and operation of a Brighton Brickyard owned and operated by Isaac Moore. The date of 1828 places him in operation about the same time period that the Buckland family was starting on their brick industry. The quantity of 700,000 is consistent with what a “Clamp Kiln” could produce at the time, and the date on which the add was placed, March 27, indicates that Isaac was selling last years production, for brick production could not get started till late April in the Rochester area, due to cold weather conditions.

Ran away from the subscriber on the night of the 5th last, PELEG KOSS, an indented apprentice in the Brick making business, aged 20 years. All persons are forbid harboring or trusting him on my account.

The above advertisement gives proof to the continued existence and operation of a Brighton Brickyard owned and operated by Isaac Moore. The date of Feb. 8, 1834 describes a continued operation of seven years minimum. This writing also documents the use of indentured servants to operate and staff the labor positions in the brickyard.

The two advertisements and the written testimony of J. H. Cogskill set the basis of my understanding of the extent of the Isaac Moore Brick yards in Brighton. The land purchases listed below give verification to the location of the Isaac Moore Yards.

The following words were delivered by Amos Buckland at the age of seventy-eight to a reporter of the Rochester Union Advertiser : June 16, 1882…Article titled “Some Early Recollections: An Old Citizen Interviewed – Old Times Brought Vividly to View” 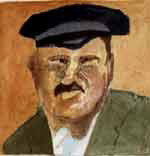 “……..I also helped build the first bridge across the river and drew the first brick across it with cattle and cart from the brick yard at Clover Street. I drew 16,000 for a man named Jackson who put up the small building which still stands at the corner of Ford Street and Buffalo as it then was called.”…Statement of Amos Buckland

Main street Bridges: “ The first bridge built in this vicinity was on Buffalo Street, now Main Street, in 1812. This bridge of wood was the first bridge across the river north of Avon, some twenty miles away. It cost about $12,000 and was paid for by the counties of Ontario and Genesee, which then
included the present Monroe County. In 1824, this bridge was rebuilt on the same piers, and again rebuilt in 1834.”

We believe that Amos Buckland is confused as to the which bridge was built when. Amos was not in Brighton when the first bridge was built and is probably remembering the second bridge in 1824. We interpret these lines to indicate that Amos Buckland (@ age 19 in 1823 when Isaac first arrived) was a teamster, hauling bricks from Isaac Moore’s Brick Yard to places of need in the city of Rochester. An interesting story connecting two of the major brick making families of Brighton at an early age.

In the Brick Yard story above related by Joseph Herbert Cogswell, it was Robert Irwin that assumed the operation of the two Brick-Yards that Isaac had originated, East Avenue & Clover Street, when Isaac moved his operations to the Twelve Corners & Monroe Avenue area.

We know very little about Mr. Irwin, his background and family, or how long he operated the yards.