The Jonathan W. Town Brickyard story provides a background to consider the difficulties of a single entrepreneur starting a brick manufacturing business in the 1850’s. To provide the technology, real estate, finances, and leadership necessary for business success plus care for a large young family is an immense challenge. Use the Industrial Statistics Chart below to view and compare the business competition he faced. 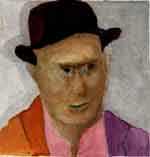 After the merger of the three major brickyards in the town of Brighton to form the Rochester Brick and Tile Company in 1853 a new brick company arose. The 1855 NYS Census: Town of Brighton Industrial Census, listed the following: 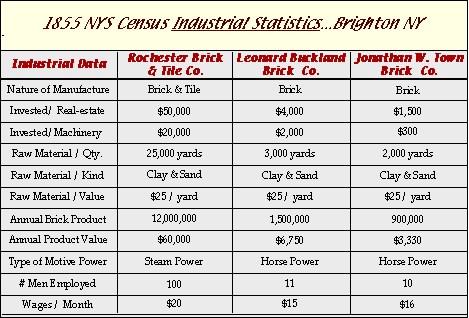 The documented existence of an independent Brick factory as described with the history of Jonathan Town may have been repeated several times in the 100+ year history of Brighton Brick. Brick companies may have operated for short periods of time and not have been documented. What we know of Jonathan Town comes to us through the 1850 US Census and the 1855 NYS Census. In 1850 his occupation was listed as brickmaker. Whether this was an independent brickmaker or an employee of an existing Brick Company is unknown. In the 1850 US Census Alvin Burton is listed as #299 on Census Records and Jonathan Town as #297, so we believe that Jonathan was working for Alvin Burton and living in one of Alvin’s houses for his brickmaking families. In the 1855 NYS Census there is clear indication that Jonathan operated an independent Brick Company.

The 1853 incorporation of three independent brick companies into the Rochester Brick and Tile Company may have prompted this young man to start his own company. He arrived in the town of Brighton in 1850 and by 1855 he was operating a brickyard close in size to Leonard Buckland’s Brick Yard.

The goal of all brickmakers was to own and operate their own yard. Jonathan’s property value is about one half that of Leonard Buckland’s and one tenth that of the Rochester Brick & Tile Company. Did he amass this wealth in two short years, or was he an independent brickmaker from the time of his arrival in 1850. Questions remain unanswered, with such little factual data. The last record we have of Jonathan is the 1855 NYS Census data, for after that we could find no records. The death of his wife, a young girl of 28 years old in 1857, and the requirement to care for a large, five children under the age of eleven, and conducting a business in competition with the giant RB&T Co. may have required Jonathan to leave town, and find care for his children in another Town or State.

Location of Jonathan W. Town Brickyard? The Census Records are not a map of the Town. The order of homes visited may not be the actual order of homes on a street, but we believe that you can assume some relationship and determine the proximity of homes to one another. If this assumption is correct, then Jonathan lived close to Edwin Wilson. The Town’s were living in a wood frame house, (listed as home #71), the Wilson’s were living in a brick house, listed as home #74) in the 1855 Brighton Census records. Edwin Wilson was listed as a farmer, having sold his brick business two years before in 1855. Jonathan Town records listed eleven laborers living at the same address, 6 from Ireland, 4 from Germany & one Indentured, all young men, ages 21 to 25. Leonard Buckland was listed as living in a brick hose and was #84, Amos B. Buckland was in a brick house as #87 on the census list. The 1852 Monroe County Map shows E. Wilson across from his Brick yard on Monroe Avenue.

Did Jonathan W. Town operate a Brickyard on Monroe Ave. across from the new Rochester Brick & Tile Co. in the area later taken over by Leonard Buckland?

In the 1850 Brighton Census Jonathan was listed as #297 and Alvin Burton was listed as #299, so we believe Jonathan came to Brighton and lived on Monroe Avenue in a home provided by the Burton Brickyard, and worked for that company. Then after the RB&TCo, in 1853, purchased and combined all operations he may started his own brickyard across the street and when his wife died sold his property to Leonard Buckland. Speculation! Speculation! Speculation!

The genealogy data taken from the 1855 NYS Census lists Jonathan as a father with five children and the oldest child was nine years old. Jonathan’s wife, Mariah, died two years later, leaving him to care for five or possibly six children. This family tragedy and not a business failure may have led to his departure from Brighton.

We assumed that Jonathan had access to a brick kiln on his property, but the investment of $300 in machinery & tools, as shown in the census data may disprove this assumption.