The formation of the Rochester Brick & Tile Company was directed by William Otis. William, a resident of the Town of Gates, operated the construction firm “William Otis & Co.”, employing several hundred laborers, building railroad beds. This company constructed the bed for the Falls Branch of the New York Central Railroad & the Rochester & Lake Ontario Railroad. Gideon Cobb and his Brickyard must have been well known to William, both were respected contractors within the County of Monroe. Stephen Otis, Brighton Town Supervisor 1845-1847, brother to William, lived on Monroe Avenue across the street from Gideon Cobb.

We have seen no historic record to cite as to how William came to invest in the Monroe Avenue Brickyards, but his brother may have helped establish a personal friendship between William and Gideon. 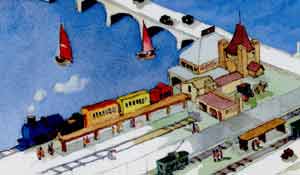 William possessed the funds and operational knowledge to direct the business operations of this newly merged corporation. The possibility of Ira Otis, William’s twenty year old son, attending the University of Rochester in 1853, being brought into the business may also have led to William’s investment. However the merger originated, the Town of Brighton benefited from seasoned management and the establishment of a major industry that would continue for sixty six years.

The sketch here illustrates the Rochester Railroad connection in the birth of this new company. Azariah Boody & William Otis had gained their wealth by working for the Railroad Companies.

Incorporation Statement: “To all whom it may concern: The undersigned hereby certify that they have organized a company for the manufacture of brick and tile by the corporate name of the Rochester Brick & Tile Co., with a capital stock of $100,000 consisting of 1,000 shares of $100 each, to be managed by nine trustees, to exist for the term of thirty years, and that the names of the trustees who are to manage the concerns of said company for the first year of its existence, are as follows: Gideon Cobb, Edwin Wilson of Brighton, Azariah Boody of Rochester, Clark Johnston of Rochester, Alvin Burton, Stephen Otis, Jason Baker, William H. Cobb of Brighton, and William Otis of Gates. That the operations of the said company are to be carried on in the town of Brighton, County of Monroe…” – Dated 3 February 1853

Rochester Daily Advertiser” Wednesday Evening – Feb. 16, 1853. “…Gideon Cobb Esq. of Brighton, well known for through-out the State as an enterprising farmer, contractor and brick maker, has been chosen President of this company. Jason Baker, Esq., of Brighton, was appointed sales man in general of the wares to be manufactured.”

William Otis continued as Superintendent of the R.B.&T.Co. till 1865 when his son Ira took over the direction of the company. Ira was President till his sudden death in 1898. The Company continued operation till 1919. The 1888 review of Rochester Industries said that R.B.&T.Co. was the largest Brick Plant in Western NYS with the latest designs of Brick Machinery and a production capacity of 15,000,000 brick per year.

This chart illustrates the merger and existence of three Monroe Avenue Brickyards, into the well financed Rochester Brick & Tile Company in 1853, in relation to time.