Below is a 1910 aerial view of a brickyard located in Coffeyville, Kansas. This postcard photo illustrates the necessary and typically compactness of factory building layout to facilitate the manufacture of brick.

Closer to Cherryvale, towns such as Corbin City and Morgantown were successful in their day, but an unknown turn of events eventually forced the downfall of both towns. In 1899, a man named C. J. Corbin incorporated the small town where a new company called the Lotterer Brick Plant was being built. According to historians, the Coffeyville Vitrified Brick and Tile Company later purchased the plant and employed about 250 workers. As the town developed, the Montgomery County History Book notes a railroad crossed the town’s west side and led to the brickyard. Houses were later built during the early 1900s, while several businesses ranging from a blacksmith shop to grocery stores began opening their doors at about the same time. Although the nearby brick company fueled the town’s success, it also propelled it toward failure. As bricks became less popular with the development of concrete coupled with Depression woes, the plant began a phase out process in the 1930s. Businesses and residents soon followed, with many of their homes being moved or torn down.

Brick complex above shows Molding Factory,5 Drying Sheds, 13 Round Downdraft Kilns and a Train to service product and material delivery. Brighton Brick was never that expansive but it was very large with over 10 kilns.

Brickmaking was the dominant industry on the Hudson River at the end of the 19th Century. One hundred thirty manufactures employed seven to eight thousand workers. Today, as in Brighton, New York, this industry does not exist. 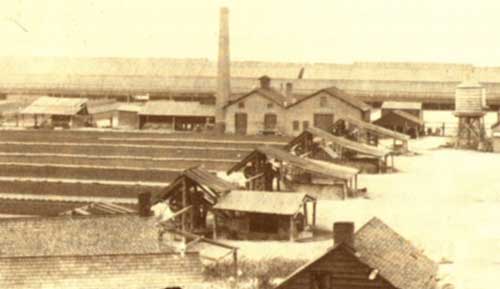 “The inventions of various types of brick machines in the nineteenth century and the improvements in them which continued to be made, and the change from horse powered to steam powered machines by which the numbers of bricks made increased from 15,000 or 20,000 per day to 25,000 to 35,000 per day, all gradually led to the disappearance of the old brickyards where everything was done by hand.”

The basic process of brick making is simple. Clay is dug from a superficial deposit, mixed with water to make it plastic, moulded either with hands alone or by pressing it into a mold, followed by either baking it in the sun or slowly drying and then firing it in a kiln.

Clay: … is a mixture of fine rock particles derived from the prehistoric weathering of other rocks. The types of dispersal are varied, air, water and glaciers are the main particle transports. Clay for brickmaking is sometimes referred to as ‘Brick-Earth’. This term describes the superficial, thin deposits of silty clays from the Pleistocene epoch (the last age: 1.8m-10,000 years ago). Such deposits were easily dug, and therefore widely used.(Note: No clays can be used in the raw state without preparation.) The traditional method of preparing brick clays involved digging up the clays in autumn and leaving them in heaps to weather until spring, when they were turned and tempered with water before being kneaded by barefooted workmen. The pugmill is a horse-powered mechanical device for tempering the clay, which was probably invented by the Dutch in the late 17th century.

Moulding the Clay: …The rectangular frame which shapes the body of the brick is called the “mould’. Sand is sprinkled on the bench, very plastic clay is is rolled in it and ‘thrown’ into the mold. before being pressed down to fill each corner. The excess clay is struck off the mold, and the brick turned out on to a pallet board to be taken to a drying platform or ‘hack’. Mechanized pallet moulding was developed in the 19th century. A clay of high plasticity is forced by a powerful press into sanded molds. The alternative to using molds is to compress and extrude long lengths of clay and then machine-cut them to the size required by a set of wires attached to a frame. This method is called wire cutting was invented at mid 19th century. Wire-cutting machines are capable of producing as many as 40,000 bricks per hour.

Drying Moulded Brick: … Before firing, all bricks must be thoroughly dry. The earliest method for drying bricks is to stack in ‘hacks’. These are open-sided sheds which allow free air circulation around the bricks. This process, depending on the weather, can take 3 to 6 weeks. Hot air floor dryers were introduced in the 19th century. Tunnel dryers were perfected in the 20th century.

Firing Brick: …To change dried mod into durable-brick with a degree of vitrification, the bricks must be fired for several hours at a temperature greater than 900 degrees C (1652 degrees F). Clamp firing is a temporary structure of stacked bricks where tunnels are left for wood fuel. Ideally a clamp should hold fewer than 40,000 bricks, to limit the extent of uneven firing. The Scotch kiln emerged at about the same time as the clamp. The method of firing is similar to a clamp, but the bricks and the fire holes are contained within a permanent, roofless structure. This type of kiln is called an updraught kiln, and is capable of firing between 20,000 and 50,000 bricks over a period of 3 to 4 days. Fredrich Hoffman patented a continuous kiln in Germany in 1858. This design and its derivatives formed the basis of large scale production for almost a hundred years. Modern, mass-produced bricks are usually fired in a tunnel kiln. Fireproof trolleys loaded with around 1,000 bricks, the process taking about 3 days.