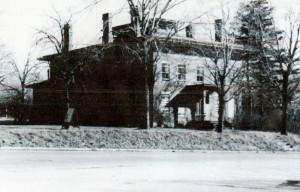 Paul Malo, Professor Emeritus of Architecture at Syracuse University, when consulting with the Landmark Society on the Brighton Cultural Resource Survey in 1998 said the following about 1100 Highland Avenue: “This is a very fine Italianate house… Let’s make it a “RED.” Despite the changes on the east wing, it’s not too drastically altered. Those minor alterations are off-set by the setting and the trees.”

The Cobb-Meagher House is situated on the south slope of Pinnacle Hill, a glacial moraine located to the rear (north) of this fine brick dwelling. Pinnacle Hill includes extensive woodland with mature trees, but has been extensively developed in recent years. The surrounding neighborhood is composed of early and mid-twentieth century, suburban tract houses. Cobb Terrace was named in honor of the Cobb family who first owned the land.

This distinctive brick farmhouse, built c.1858, is architecturally significant as an intact, vernacular interpretation of the Italianate-style of domestic architecture. The Italianate style belongs to the Picturesque Movement in architecture during the second half of the nineteenth century. The style was loosely inspired by the rural architecture of northern Italy. The architectural pattern books of Andrew Jackson Downing of the 1840-1850s helped to popularize the style in America.

The asymmetrical composition of this house, with its square, two-story main block and lower side wings, is typical for the Italianate style. Its hipped roof and wide-projecting eaves and porches with chamfered square posts are also typical. Below the porch deck are the original decorative wood screens that feature incised cruciform designs set inside diamond-shaped panels. The main section is three bays wide and four bays deep. The mostly 6/6 double-hung windows feature stone sills and lintels. Most of the windows on the main block and center wing have louvered wood shutters. Two nineteenth-century brick chimneys project above the west and east slopes of the main block’s hipped roof. The door at the main entrance is flanked by narrow sidelights and a rectangular transom. Both of these features retain their original decorative etched glass panels that feature floral and geometric designs. There have been some changes through the years, but the house retains a strong sense of its nineteenth century character.

The Cobb-Meagher House is historically significant for its association with Brighton’s agricultural heritage and the Cobb family, prominent pioneer settlers and businessmen in the town. The property was owned by descendants of the Cobb family until about 1997.

The 1852 county plat map shows six buildings on Highland Avenue between South Clinton and Monroe Avenues. Three are owned by the Cobb family and three are owned by the Hagaman family. The house at #1100 is not yet indicated. Just to the east of Highland and Monroe Avenues is a building marked “G. Cobb” – this was the large brick Italianate home (no longer extant) of Gideon Cobb. To the south, on the west side of Monroe Avenue, is a building marked “G. Cobb Brick Yard.” This is the brick manufacturing business that Cobb established in the town by the 1820s.

The 1858 county map shows the building at 1100 Highland (also referred to as “Poor House Road”). The owner is listed as J.D.Cobb. The 1869-70 county directory has a Brighton listing for James D. Cobb… farmer, 100 acres.” It appears that James D. Cobb, son of Gideon Cobb, was the original owner of this house. With his connections to the Cobb family, it is logical to assume that the bricks used to construct this house at #1100 came from Cobb’s Brick Yard.

Gideon Cobb came to Brighton from Vermont in and began the manufacture of bricks on Monroe Avenue before 1820. He married Roxana Worden in 1819 and in 1821, he opened his house at Highland and Monroe as a stage coach tavern. Cobb’s Hill is named after him. Gideon Cobb died in 1864 leaving six surviving children, including Lucina Cobb Hagaman who, with her husband Howland Hagaman, lived with Gideon at the time of his death.

James D. Cobb died in 1899. His will directed his executors to erect a monument on his plot in Mt. Hope Cemetery costing not less than $800 (a substantial amount of money at the time). James had at least two surviving daughters, Hannah Cobb Eder and Bessie May Cobb Schrader. Hannah became the owner of the house and the 80-acre farm at #1100 but by 1902, it appears that her sister’s family, the Joseph P. Schraders, had ownership. The 1930, 1935 and 1940 suburban directories show Bessie May Cobb Schrader as the owner. By 1959, Margaret Meagher, the great-granddaughter of Gideon and granddaughter daughter of James Cobb was the owner of #1100. She lived in the house until her death in 1997. A collection of Cobb family memorabilia, which was found in the attic of this house, was turned over to the Brighton Town Historian, MaryJo Lanphear, for the town’s archives.

The current owner has made some additional changes which have carefully maintained the historic integrity of this important Brighton landmark.