Gideon was the quintessential pioneer. He knew everyone in Town and all knew and were indebted to Gideon. He was a Soldier who helped secure Brighton and New York State during the War of 1812, Firefighter in City of Rochester, Salesman of tools made by his brother William, Sand Co. Proprietor, Brick Co. Proprietor, Teamster, staunch Abolitionist engaged in the “Underground-Railway”, Building Contractor, Tree Stump Removal Contractor, Road Builder, Tavern Proprietor, Father, School Director (School #5), Farmer, and an interesting Story Teller… a great guy! He was a frontiersman who moved to Brighton, found a wilderness, showed extraordinary courage and developed an area for civilization to take hold. Participating in and demonstrating leadership in all aspects of frontier life and enjoying the process. Brighton was fortunate to have had such a resident.

Gideon constructed a kiln, manufactured bricks and applied his vast skills to erecting the City of Rochester and the Town of Brighton. To build was his drive, bricks were secondary to progress. Gideon’s involvement in the business of brick manufacture was created not by family connections as the Buckland’s nor financial investment as the Otis family but by a desire to build and create. Gideon was a contractor who applied his brick product to community building.

At age 20, Gideon and William Cobb, (his older brother by four years), in association with the brothers Francis and Dr. Matthew Brown, moved from the Rome, NY area to Rochester, NY. William Cobb was a blacksmith in association with the Brown brothers who established a mill at the high falls of the Genesee River. The year was 1812 and the census population of Rochester was fifteen people. The Brown’s brought millwrights, mill irons, a small stock of goods, and commenced improvements in an old mill building, in the area to be known as Brown’s Race. Shortly after Gideon’s arrival, in 1812, when volunteers were called for taking Fort Erie he enlisted in the Army. He was assigned to an area that is now Aurora, in Erie County on New York State, where he was appointed an officer and erected certain defenses to protect the settlement from an anticipated attack of the Indians. Gideon returned in 1813 and in 1814 purchased and used a lot on Front Street, as a cattle and hog yard, he lived as a resident boarder in a house nearby.

Gideon & War of 1812: ” When the war broke out the frontier was almost entirely unguarded; only a few hundred militia were on duty to protect the American settlements. Communications were bad, the roads were very poor, and it was difficult for Americans farther east to support their frontier cousins. On the other hand the British had control of all-important water routes that were the main avenues of military conquest in the American wilderness. By October 1812 the Americans were better prepared for hostilities. They had an army of about 6,000 men, over half were regulars, assembled along the Niagara River between Fort Niagara and Buffalo. During 1813 most of the military activity took place at the end of the year. In December of 1813 two British Armies plus many Indians crossed the Niagara River. On December 18, 1813 Fort Niagara was captured by the British and then British forces attacked Lewiston and laid waste the entire countryside as far south as Tonawanda Creek. Ten days later General Riall’s men burned Black Rock and Buffalo. Panic-stricken settlers fled eastward to Batavia and even across the Genesee River. As 1813 ended, British control of the Niagara Frontier was almost unchallenged.”

Gideon returned to Rochester in 1813, the War was to continue till February of 1815. “Volunteer soldiers were badly fed and disgracefully clothed. In winter, the unfortunate sentries who patrolled the Canadian-American border shivered and shook on duty because they lacked overcoats.” After the War (1850’s), Gideon Cobb, presented Claim No. 8098, to New York State for payment for Military clothing and equipment provided by individuals who volunteered or were drafted into Service.” Amount Allowed: $65.50 … Gideon was elected a delegate to the War of 1812 Veterans Convention, January 13, 1854, held in Philadelphia Pa.

“Gideon Cobb about 1814 acquired the southeast 100 acres of Lot 61, Township 13, Range IV (Penfield) where Allens Creek flows into Irondequoit Creek. He cleared the land and built a house at the top of the hill on Penfield Road. It became known as the Allens Creek Farm. About 1820 James K. Livingston acquired the tract, and Cobb moved to Rochester”

William operated a Forge in Rochester at the Genesee River Falls..where he made Axes, Scythes & other forgings

Reference: Book: The History of the Cobb Family by Phillip L. Cobb

In 1826 when John Q. Adams was President of the United States of America, a William Cobb and wife Lora conveyed land to Gideon Cobb, who lived on Lot #37 in the Town of Brighton, as per the Quit Claim Deed dated April 29, 1826 as recorded in Monroe County Clerk’s Office. William died in 1826 in the state of Kentucky where he went to start a new Forge*…

Reference: Book: A History of The Town of Brighton 1814-1989 by Marcia Hibbs Finn

The loss of his brother William must have brought great sorrow to Gideon, for their association was very close.

Since Gideon Cobb was first among Rochester Brickmakers, we have attempted to justify the starting date and the starting location of Brighton’s first Brickyard. The details of Gideon’s recorded activity establish that time as 1819 and the location at intersection of Monroe Avenue and Highland Avenue.

Built in the 1820s and located at the corner of Highland & Monroe Avenues. The large, nearly square, brick house that stood at the southeast corner of Monroe and Highland Avenues, was erected by Gideon Cobb in the early 1820’s. Cobb purchased three hundred acres which included Cobb’s Hill, now the city reservoir. The brick were made by hand from clay found in the fields near by. The house was once used as a tavern. Originally, it must have been in the Post-Colonial style, but sometime during the Victorian era, the wide projecting cornice, copula, and entrance porches were added.

This elegant brick mansion was a Brighton landmark for many years. After a long period of neglect, it was torn down in 1965. Does anyone have a brick from the original house? 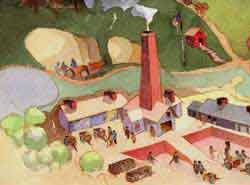 Rendering of the Cobb Brickyards in Brighton.
Original illustration by Leo Dodd

Cobb’s BrickYard, Sand Pit and School, Home and Farm were all part of the views at the intersection of Highland & Monroe Avenues. “There was little brick until Gideon Cobb began manufacturing them on the Monroe Avenue Brickyard site, a little before 1820. Brick before this had to be brought in, probably, from Holcomb or Clarkson, where it was made about 1816.”

The following article appeared in the “Rochester Daily Advertiser:

BRICKMAKING ASSOCIATION – Owing to the steady – indeed we may say rapid – growth of the city the article of brick is one of much importance; and we have been informed that many structures are greatly delayed for the want of this article of building. As a means of giving greater energy to the manufacture of brick and drain tile – the latter an article rapidly coming into favor – the Democrat learns that an association denominated “The Rochester Brick and Tile Manufacturing Company” has been formed with a capital of $100,000 – That paper adds – “Several of our wealthy citizens, not engaged in this branch of business before – as Messers Boody, Otis and others, – have taken stock in this company. Gideon Cobb Esq. of Brighton, well known for through-out the State as an enterprising farmer, contractor and brick maker, has been chosen President of this company. Jason Baker, Esq., of Brighton, has been appointed sales man in general of the wares to be manufactured. It is known that in Brighton, within three miles of the city, is an extensive bed of brick clay, from which have been produced most of the brick used in building up our city. The gentlemen owning and operating the brick yards are all of the most energetic sort. A large business will be done under the new arrangement. Of the probable quality of the brick and tile that will be produced, we need not speak. They will make none but such as will be likely to command the market.” 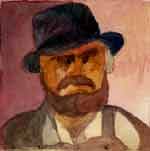 The red dots on the 1852 Map of Brighton below indicate the Brickyards of Gideon Cobb, Alvin Burton, & Edwin Wilson.

The 2002 Map of Brighton where the roads of Sylvan Street, Glen Ellyn Way & St. Regis Drive intersect with Monroe Ave. and locate the three old Brickyards.