Brighton NY, on the banks of the Genesee River, was born of the glacier. The recessional departure of the glacier left, beneath the melting rivers of icy water, on the flatlands south of the Pinnacle Range, a shallow layer of clay. These clay deposits were mined along with the adjoining banks of sand, which together provided the material necessary for the basic industry of Brickmaking. The kiln fires lit up the skies of our small town for 120 years in the summer evenings. 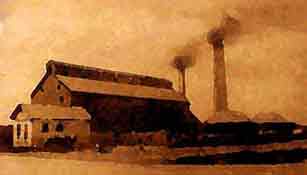 The Brighton Brickyards were as follows: 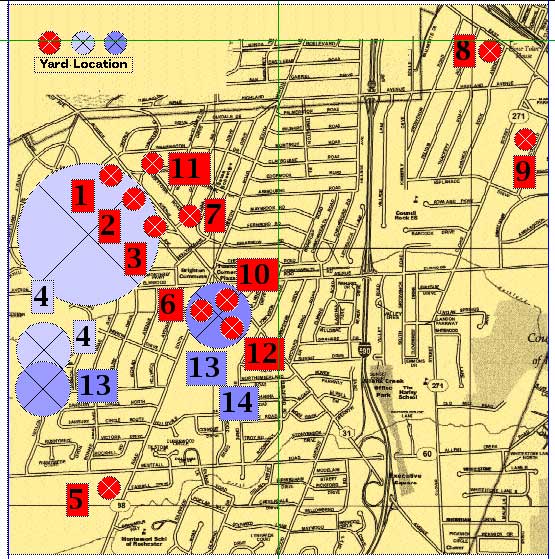 We will start with three quotes which establish the origin of the Brighton Brick Industry.

“The heart of the Rochester Tract was at the intersection of Buffalo (Main) and Carroll (State) Streets, and it was on lot number one, now occupied by Powers Block, that Henry Skinner was obliged, by his deed, to build and erect a dwelling house not less than twenty by thirty feet, with brick or stone chimney, on or before the first day of January, 1812. The presumption that in the wilderness, brick and stone chimneys could be built, was probably because of acquaintance of Nathaniel Rochester with the elegant brickwork of Maryland in his time, and the fact that mud and splat chimneys were always a menace to pioneer habitations. In 1811 there was not a single family on the west side of the river, and only three on the east side and naturally, no brickyards or lime kilns. However a mud chimney was built, and the Scrantom family moved across the river into the Skinner log cabin on July 4, 1812.”

“There was little brick until Gideon Cobb began manufacturing them on the Monroe Avenue Brickyard site, a little before 1820. Brick before this had to be brought in, probably, from Holcomb or Clarkson, where it was made about 1816.”

From “Architecture in Rochester” …page 287:

“Gideon started a brickyard or rather a few brick had been made, and young Cobb seeing the possibilities took over the incipient (definition of incipient = only partly in existence), business and proceeded to enlarge it. It was near the site of the old yard near the twelve corners operated until a year or two ago.”

We have used the three quotes above to set the background for establishing the starting time for operation of the Brighton Brickyards. There seems to be no certainly in the Rochester historical record as to where and when brickmaking began. The brickmakers have been securely identified but the dates of operation require some speculation So possibly 1817 is the origin of Gideon Cobb brick manufacture, followed by 1822 for the Buckland family , then followed by Isaac Moore in 1823. Edwin Wilson, Alvin Burton and Robert Irwin enter manufacturing in the 1830’s, possibly in close association with original three. Jason Baker and Jonathan Town arrive in the 1840’s and 1850’s.

The first industrial consolidation is achieved by the finances of William Otis, who purchased three yards and operated them as the Rochester Brick & Tile Company. John Weis, in 1860’s establishes a brickyard on property adjacent to that owned by Isaac Moore and Abner Buckland which develops into the German Brick & Tile Company and the Rochester Clay Brick & Tile Company. All participants in brickmaking must have been connected, for the land area used for brickmaking is small, adjacent and with time must have been confined. The process of burning clay to produce brick was a very, very dirty procedure and close neighbors must have objected to the polluted air. The interrelationships of brickmakers and land can only be guessed at for there exists a minimum of recorded testimony.

The 1887 map image at right gives a great view of the appearance of Brick Factories on Monroe Avenue. You can almost smell the smoke that must have been produced and expelled into the Brighton air along this plank road. The map has been rotated to place Monroe Ave. as horizontal.

The next image is an enlarged image of the above 1887 map showing the details of the German Brick & Tile Company. This presents an image that shows many structures. I have to believe that some of these belonged to the Abner Buckland Brick Yard. Abner had died in 1865 leaving his son Orrin to operate the Brick Yard. The 1885 is the last listing found which describes Orrin as a brick maker. The property is adjoining the Buckland land and may have been used by both the Bucklands and the German Brick & Tile Co. Sure wish we could find a map that located the Abner Buckland Brick Yard!

“The Rochester German Brick and Tile Company was incorporated in 1877 with the above named officers and a cash capital of $22,000, and the office of the company is at No. 279 South St. Paul St. with yards and works at Brighton, comprising forty acres of land fitted up with engines and boiler house, late improved brick and tile machinery, kilns, sheds, barns and houses for the accommodation of the employee’s, one hundred in number. They also have another yard on Brooks Avenue – 20 acres in extent – where fifty men are employed. Every convenience for the expedition of work is provided, and the quality of the output is best attested by the demand, to their utmost capacity from the opening to the close of each season. While prepared to manufacture high grade drain tile on a large scale, it has been found most profitable to give special attention to building bricks, of which they turn out vast quantities of the best grades, both common and pressed.” 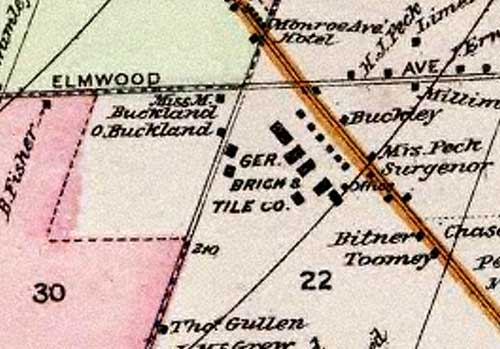 Note in Gates Sesquicentennial Book… Famous Brick Yard – “Many residents of Gates will remember the brick yard, formerly located along Brooks Avenue on what is now airport property. An extensive red clay deposit in that area made it possible for the Rochester Clay, Brick & Tile Co. to make forty or fifty thousand bricks every day for a period of several years. Fires were started in the kiln at the beginning of the work year and because it was always warm in that building, it became a favorite stopover for tramps seeking a warm place to sleep. Steam shovels dug and loaded the clay on cars which were taken by team or trucks to the mixing plant and then to the kiln, where it was put in molds and would dry over night. According to Hobart Whitmore, who was superintendent of the yard from 1927 to 1935 when the buildings were torn down, about sixty men were employed there at one time. …”