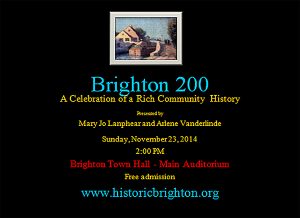 2014 Bicentennial Reception presented by the Town of Brighton – Brighton 200 at the Country Club of Rochester. 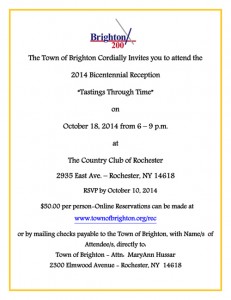 Travel back in time 200 years in two hours: an immersive experience for Brighton’s Bicentennial. Register to witness a professional re-creation of this historic event at the same location as the newly-formed town’s first meeting on April 5th, 1814. 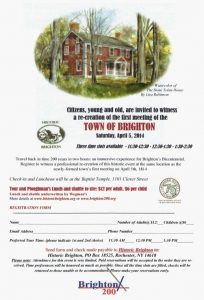 May 4, 2014 – “An Escorted Bus Tour of Brighton’s Designated Landmarks”

In continuation of its year-long bicentennial celebration, the Town of Brighton teamed up with Historic Brighton on Sunday, May 4, 2014 to celebrate the town’s architectural history with three 90-minute escorted bus tours of the Town’s fifty-eight designated landmarks which date from 1792 to 1957. They include many of the popular architectural styles from the late-18th to the mid-20th century: Federal, Greek Revival, and Italianate among them.

These tours highlighted the town’s structures which have achieved official landmark designation by the Town of Brighton. Brighton’s Preservation Ordinance was enacted in 1995. At the end of each tour, attendees received a special souvenir booklet containing data and photographs of each of the town landmarks. 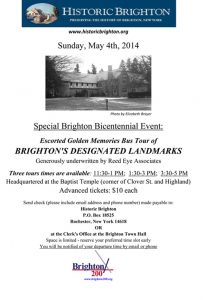